Empaths have sensitivity towards movies, TV, videos, and news broadcasts that depict scenes of violence or physical or emotional pain and trauma, whether it is an adult, child or animal. This can reduce them to tears and cause them to become physically ill. They are unable to justify the suffering that they feel and see and have no tolerance for others who don’t share the same level of compassion as they do.

Empaths work in careers that enable them to help others, whether it’s with animals, nature or people. They are passionate about their work and their dedication to others. You will often find empaths in volunteer positions dedicating their time to help others without pay or recognition.

Due to their ceaseless imagination, empaths are great storytellers; they are constantly learning and asking questions. They are also very gentle and romantic; they have a passion for family history and will keep old photos, jewelry or other items of value that have been passed down from generations. They are often the ones who sit and listen to stories told by grandparents and great grandparents and hold a wealth of knowledge about the history of their family.

To suit the variety of moods that they experience, they listen to a range of music genres. People are often curious about their taste in music, especially the extent of the diversity. One minute they are listening to classical music and the next hardcore rap! The lyrics to a song can have a powerful effect on an empath, especially if it relates to something they have recently experienced. It is advised that empaths listen to music without lyrics to avoid sending their emotions into a spin.

Empaths use their body language as a form of expression; they can articulate themselves just as easily through dance, body movements and acting as they can through words. Empaths are capable of exhibiting high amounts of energy when they dance; they get lost in the music and enter into a trance-like state as their spirits sync with the beat and the lyrics. They describe this feeling as becoming completely lost in the moment; they are no longer aware of the presence of others.

Empaths have very attractive spirits, and so people are naturally drawn to them without understanding why. They will find that complete strangers feel comfortable talking to them about the most intimate subjects and experiences. Another reason why empaths are so magnetic is that they are very good listeners; they are bubbly, outgoing, enthusiastic and people love to be in their presence. They are the life and soul of any party, and people like to have them around because they feed off their energy.

Due to the extreme nature of their personality, the opposite is also true; their moods can switch in an instant and people will scatter like cockroaches to get away from them. If an empath doesn’t understand their gift, the burden of carrying so many emotions can be overwhelming. They don’t understand that they are feeling someone else’s emotions; it is confusing to them. One moment they are fine and the next they are feeling a tsunami of depression, which causes them to act out.

It is not a good idea to abandon an empath in the heights of one of their mood swings. Whoever is around at this time should lend them a shoulder to cry on, become compassionate, and be a listening ear. This return of emphatic emotional care will often lead to an instant recovery. Empaths are often misunderstood, and it is a crucial part of their journey that not only do they understand themselves but others around them do too. 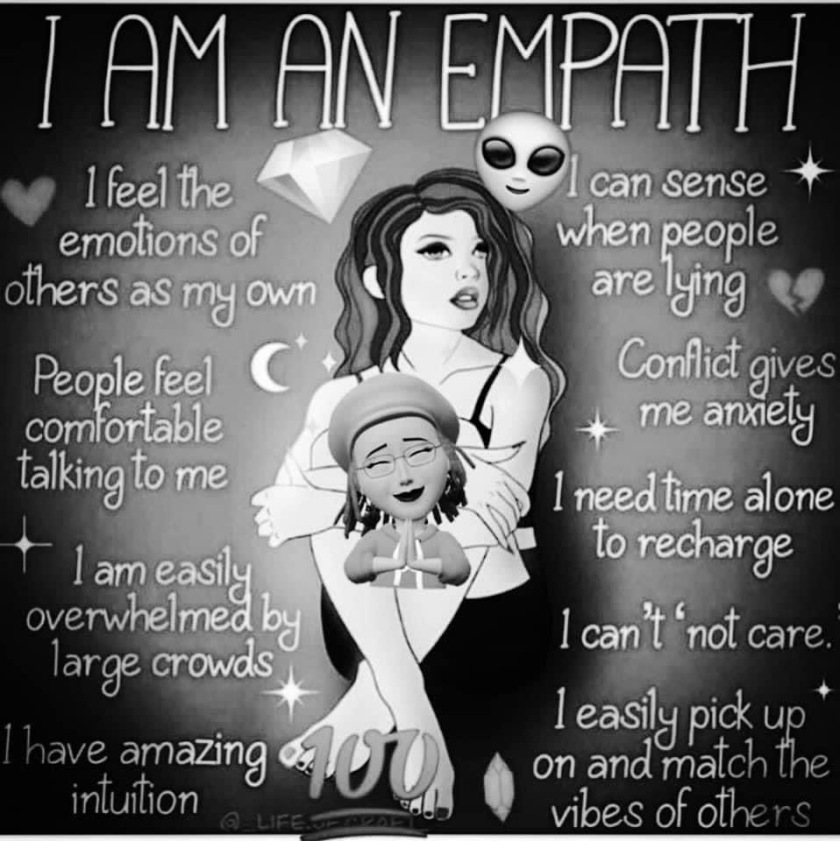 I have joined with many parents affected with the surreal , yet accepted issue of child abuse via Pathogenic Parenting / Domestic abuse. As a survivor of Domestic Abuse, denial abounded that 3 sons were not affected. In my desire to be family to those who have found me lacking . As a survivor of psychiatric abuse, therapist who abused also and toxic prescribed medications took me to hell on earth with few moments of heaven. I will share my life, my experiences and my studies and research.. I will talk to small circles and I will council ; as targeted parents , grandparents , aunts , uncles etc. , are denied contact with a child for reasons that serve the abuser ...further abusing the child. I grasp the trauma and I have looked at the lost connection to a higher power.. I grasp when one is accustomed to privilege, equality can feel like discrimination.. Shame and affluence silences a lot of facts , truths that have been labeled "negative". It is about liberation of the soul from projections of a alienator , and abuser .. View all posts by GreatCosmicMothersUnited

This is a text widget. The Text Widget allows you to add text or HTML to your sidebar. You can use a text widget to display text, links, images, HTML, or a combination of these. Edit them in the Widget section of the Customizer.
%d bloggers like this: